Under Massachusetts General Law the term “wetlands”, is defined as wet meadows, marshes, swamps, bogs, areas where groundwater, flowing or standing surface water or ice provide a significant part of the supporting substrate for a plant community for at least five months of the year; emergent and submergent plant communities in inland waters; that portion of any bank which touches any inland waters.

Wetlands are important to the environment and society for a variety of reasons.  They regulate the flow of water by retaining storm flows for short periods, thus reducing flood peaks; They protect lake shores by providing a buffer for the erosive action of waves and other storm effects; They improve water quality by retaining or transforming excess nutrients, and trapping sediment and heavy metals; and they provide many wildlife species critical habitat for breeding and nesting. Learn more about this online. 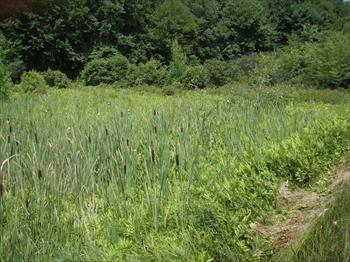 Like many other towns in Massachusetts, Amherst lost many of its wetlands during the 19th century when dredging and ditching to drain land and ‘improve’ it for agriculture was common practice. Today, the Lawrence Swamp in South Amherst is the largest remaining wetland complex in town. Remnant stands of red maple swamp in the Podick Conservation Area hint at what the Great Swamp in North Amherst and Hadley may once have been like-covering an area including much of the UMass campus westerly along the Mill River and north into Sunderland. Much of the remaining wetlands today are found in the floodplains of the Fort River and smaller tributaries like the Plum and Hop Brooks.

Vernal Pools
Vernal pools are small, shallow depressions that are isolated from other surface waters. They flood in the spring and sometimes in the fall, but they are typically dry in the summer. They often have hydric soils. When dry, vernal pools can often be recognized by a layer of stained leaves covering the dry depression.

As of April, 2007, the Natural Heritage and Endangered Species Program had identified 11 certified vernal pools in Amherst (Mass Wildlife, Natural Heritage and Endangered Species Program, 2007). Many more vernal pools exist in town but have yet to be officially certified by the Commonwealth. These habitats are protected under the Massachusetts Wetlands Protection Act, as well as other federal and state regulations. Under the Wetlands Protection Act, vernal pools must be within another resource area to be regulated, but a stand-alone vernal pool can be certified. In response to this, under the town of Amherst Wetland Protection Bylaw, a 200 ft. buffer is offered to pools located in upland areas and those outside a wetland.

Lawrence Swamp and Hop Brook
Long a focus of town preservation efforts, the Lawrence Swamp contains more than 600 acres of protected land that is some of the most ecologically diverse in Amherst. The Hop Brook and extensive wooded wetlands characterize this water-rich resource. Lawrence Swamp contains a number of the town‘s wells, which tap a substantial local aquifer and provide Amherst with excellent drinking water. The area includes hundreds of acres of rich farmland. While most of Lawrence Swamp is under some form of preservation, a few hundred acres are still a high priority for the town‘s land conservation efforts.

Fort River Corridor (including Muddy, Plum and Hop Brooks)
The Fort River and its tributaries help define South Amherst with rich farmland, extensive wetlands, and excellent wildlife habitat. This system is considered 1 of the most important watersheds state-wide for the diversity of fresh water mussels and includes 1 federally endangered species. Efforts to preserve more land and improve water quality in these streams are ongoing and are a major focus of the town and many regional conservation organizations.

Amethyst Brook Corridor
Amethyst Brook and its tributaries provide excellent cold water habitat for native fish including the Eastern Brook Trout. Surrounded by protected forest and farmland, efforts to protect additional acreage will focus on parcels with river frontage and parcel that complete large blocks of contiguous protected lands. The upper reaches of the Amethyst Brook watershed contain the small brooks and streams that supply our reservoirs in Pelham with a clean, consistent supply of water.

Mill River and Cushman Brook Corridors
The Mill River below Puffer‘s Pond and the Cushman Brook above, form the core of an extensive greenway in North Amherst stretching from Leverett to Hadley. Both contain above-average water quality and are known for their recreational value to Amherst residents and visitors alike. This corridor is significant to many nesting bird species as well as any number of mammals including moose, turkey, deer and bear. The upper watershed of the Cushman Brook provides water to the Atkins Reservoir.

Philosophy
Wetlands are critical to preserving the quality of water the town of Amherst relies on for drinking water and for providing many wildlife species with critical habitat for breeding and nesting. To protect wetlands, vernal pools, and water supply sources, the town of Amherst focuses land preservation efforts in areas identified as priority habitat (for rare and endangered species), containing valuable natural resources, prime agricultural soils, watershed lands that supply Amherst’s drinking water, and areas with large contiguous blocks of undeveloped open space. We do this through: