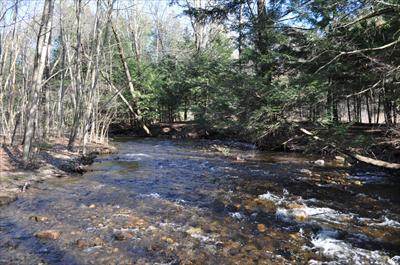 Water Test Results: Most Recent | All

The Mill River area in north Amherst runs through a natural greenbelt southwest to Hadley and the Connecticut River. Much of the flood plain is protected from development by FPC zoning restrictions, the Town Wetlands Protection by-law, and the Massachusetts Wetlands Protection Act. Active land acquisition and trail easements in this area provide extensive space for outdoor recreation while protecting wildlife habitat, water quality, and scenic beauty.

The Mill River below Puffer‘s Pond and the Cushman Brook above, contain above-average water quality and are known for their recreational value to Amherst residents and visitors alike. This corridor is significant to many nesting bird species as well as any number of mammals including moose, turkey, deer and bear. The upper watershed of the Cushman Brook provides water to the Atkins Reservoir.

The Fort River and its tributaries help define South Amherst with rich farmland, extensive wetlands, and excellent wildlife habitat. This system is considered one of the most important watersheds state-wide for the diversity of fresh water mussels and includes one federally endangered species. Efforts to preserve more land and improve water quality in these streams are ongoing and are a major focus of the Town and many regional conservation organizations.
The Fort River is the primary river that runs through central and south Amherst. Sections of the river are included on the Estimated Habitat Map of Endangered and Rare Wetland Wildlife Species published by the Massachusetts Natural Heritage Program. In response to this inclusion, proposed developments in east Amherst near the Fort River have come under more detailed review by the Conservation Commission and plans to acquire conservation land in this area have been successful. Efforts to protect more land in this area are ongoing.

THE FORT RIVER is the longest free-flowing tributary of the Connecticut River in Massachusetts. Its watershed contains all the reservoirs for the town of Amherst, and the origin of the river itself is the Atkins Reservoir. With heavily forested uplands and a relatively high degree of land protection in the watershed, water quality is sufficiently good that the Fort provides core habitat for native fish (including species of special concern such as bridle shiner), invertebrates such as the federally listed endangered dwarf wedgemussel, and at least four other state-listed mussels species (Ethan Nedeu, unpub. data). The river provides “habitat” for residents of Amherst and Hadley as well: several public recreation areas are situated along the river including swimming holes, the Groff Park playground, and the Norwottuck Rail Trail and bike path. Its accessibility and central location within the Five College area make it a prime resource for research, education, and public outreach.

To redress the lack of information on the Fort, Rushing Rivers Institute has initiated a collaborative partnership with colleagues at UMASS, Mount Holyoke College, Hampshire College, and Amherst College to establish a monitoring program that will collect and provide access to data on water quality, seasonal flow dynamics, and ecological status of the Fort River to resource managers, scientists, students, environmental advocacy organizations, and the local community. Long-term data that documents seasonal flow changes and flood events in an un-impounded river like the Fort can inform management plans and establish restoration goals for other, more impacted waterways throughout New England, and will directly assist the towns of Amherst and Hadley in management decisions which impact the river system. Data (including recordings from underwater video cameras and hydrophones) will be uploaded to the Internet, creating a portal for real-time access to the study. (www.rushingrivers.org)


Long a focus of Town preservation efforts, the Lawrence Swamp contains more than 600 acres of protected land that is some of the most ecologically diverse in Amherst. The Hop Brook and extensive wooded wetlands characterize this water-rich resource. Lawrence Swamp contains a number of the town‘s wells, which tap a substantial local aquifer and provide Amherst with excellent drinking water. The area includes hundreds of acres of rich farmland. While most of Lawrence Swamp is under some form of preservation, a few hundred acres are still a high priority for the Town‘s land conservation efforts.

Amethyst Brook and its tributaries provide excellent cold water habitat for native fish including the Eastern Brook Trout. Surrounded by protected forest and farmland, efforts to protect additional acreage will focus on parcels with river frontage and parcel that complete large blocks of contiguous protected lands. The upper reaches of the Amethyst Brook watershed contain the small brooks and streams that supply our reservoirs in Pelham with a clean, consistent supply of water.